×
Go to content
Only 60 min drive from Akbuk you will find the well known city Bodrum.
When Turkish people wax lyrical over Bodrum, they are often describing the heavenly bays of the Bodrum Peninsula, namely Torba and Türkbükü. But even the center of Bodrum, with its Greek-style whitewashed houses dotting the hillside overlooking twin bays, is something to write home about.

Bodrum is a resort town in Southwest Turkey, and it is one of the most popular holiday destinations. The unique blend of nature, history, entertainment, and the hospitality of Turkish people made Bodrum one of the most visited destinations  inTurkey.

Originally known as Halicarnassus, the capital of the kingdom of Caria, Bodrum boasts a wealth of history with recent years changing the landscape significantly. Thankfully modernisation has been kind and Bodrum still remains the picture postcard setting we see in the travel brochures. The photos of pretty pink bougainvillaea cascading down the white washed houses and into the sea really are apt, the Castle of St Peter separating Bodrum's two bays is a stunning spectacle! Bodrum may be a place where traditional sits next to modern, but the atmosphere and beauty lures you in and leaves even the hard hearted wanting more. 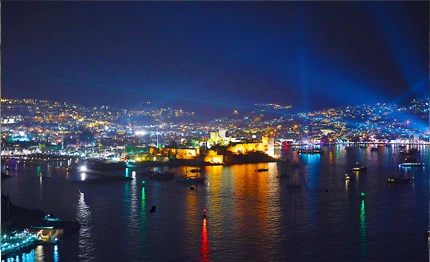 Bodrum has a diverse foreign and Turkish community. Many well to do Turks from Istanbul and Ankara have chosen to buy holiday homes around Bodrum peninsula. Since the opening of Bodrum Milas International Airport, the British, Scandinavians, Germans, French, Dutch and lately the Russians have all followed suit.
Bodrum has an ever changing tapestry with strict laws regulating the building and development in the area ensuring it remains idyllic
Back to content